The History of the TSD Mascots and first TSD emblem

Way back to 1894, the football team at TSD called themselves the Eleven Roses in honor of Superintendent Rose, for allowing them to establish the football team. Earlier baseball and basketball teams were known as Dummies, Scrubs, Deaf-Mutes. From 1910-1920, they were called the Lone Stars. From 1929-1939, the athletic teams were the Mules. Then, they were known as the Silents from 1939 until 1953. All over the nation, the athletic teams of schools for the deaf were also known as the Silents.

In 1953, at the newly established Boys Athletic Association, one of the first official acts was to adopt a name to replace the Silents. The members thought up of names that would be easily recognized as “ Texan” in origin. The Texas Rangers was immediately considered favorably by a large majority of the students. So, it was moved and voted hereafter TSD athletic teams be known as the TSD Rangers.

From then until 1963, there was no image of the TSD Ranger that represents the school. No pictures were anywhere at school while at the other high schools, their school emblems on T-shirts, book covers, and on cars were seen. Whenever you saw a Tiger, you knew that student was from St. Edwards High School. When you saw a picture of a Rebel, you knew that student was from Travis High School. But, the Texas School for the Deaf had nothing. So, in November 1963, the Pep Squad decided to have a Ranger contest asking students for ideas for our school emblem. Then, their drawings went to a group of faculty members to choose the four best ideas. Those best ideas were sent to a professional artist in New York. The project reached its culmination on Thursday, March 23, 1964 in a general assembly in the school auditorium, now the Robert L. Davis auditorium.
The announcement was made that a school emblem had been adopted. The winners were named at the meeting. The first place went to Bonelle Liardon for her interpretation of Mr. Ranger - strong and dignified. In second place was Wayne Carter who turned in a comic figure of the Ranger. Placing third was Janice Clifton with her clever way of lettering TSD. Tommy Boatman’s suggestion of the State of Texas as a background for the emblem won him the fourth place. The new insignia was shown with an enlarged composite of all these four drawings.
See below our first TSD school emblem. 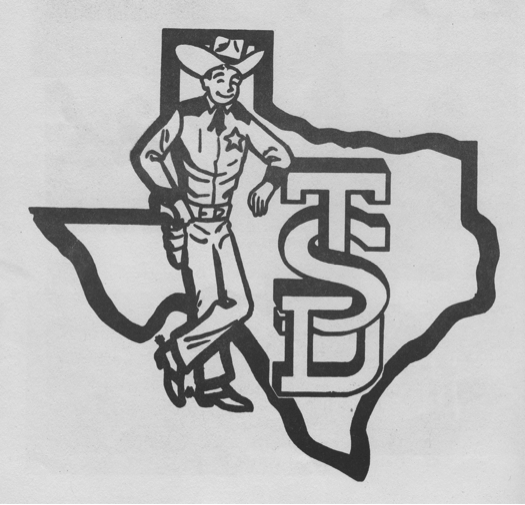 Since 1963 until 2005, the Texas Ranger had been featured on the school emblem.  Although the name of the mascot remains the same, it was updated and overhauled.  The old Ranger was always shown as a male and often portrayed with guns. The school preferred to move to another symbol of the famous Texas Ranger by including female students and separating our school from guns or promoting violence. After intensive research and interviews with focus groups of the TSD students, former students, faculty members and parents of the students, the school selected the horse. The horse was chosen because it embodies the characteristics of agility, strength, power, pride, spirit and intelligence like our TSD students. Like the cowboy hat, badge, boots, and guns, the horse has always been an integral part of the Texas Rangers’ lore. Coupled with a badge in the shape of a star, the new design emphasizes both the Ranger spirit and the Lone Star pride at TSD.
See below our current TSD school emblem. 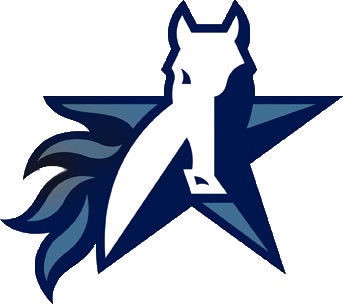