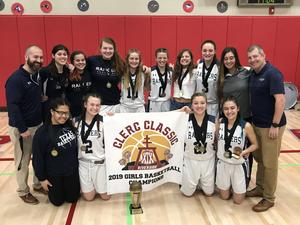 Our girls basketball team began the 2019 Clerc Classic with our perfect season being the talk of the tournament.  Upon arrival, it did not take long for fans, coaches, and other participating athletes to bring up our perfect season in casual conversations.  The players handled the pressure with extreme maturation as we approached the first game of the tournament against #8-seeded Arizona (2-12).  The team made quick work against Arizona with three players scoring double-figures.  The final result was 67-17. Each player scored during the game and played an important role in the victory.  The second game would pair us against #4-seeded CSD-Fremont (12-2) and fans questioning our ability to handle a solid team led by a veteran coach, David Hamilton.  As with the Arizona game, three players scored double-digit points as the team put up a solid defensive effort.  CSD Fremont scored the lowest point total of the season against us, continuing our focus as a "defense-first" team. The result for the semi-final game: 43-23.
The championship game would be the fifth straight match up against #2-seeded Maryland (13-2).  It did not take long for Maryland to build an early 10-3 lead before the team woke up and held them to three points in the 2nd quarter.  Our halftime lead would be 19-11.  The Texas girls came out strong in the second half and our defensive pressure became too much for Maryland as we steadily built a lead that went as high as 19 points.  Maryland would cut into the lead late in the 4th quarter but could not steal the momentum from us as we went on to win by 11 points, 47-36.  This is our second straight Clerc Classic victory over Maryland as the team now has their sights set on finishing their season strong with district and state competitions.
Brian Sipek
Texas School for the Deaf