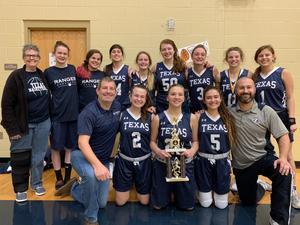 The TSD Varsity Girls basketball team traveled to Boerne, TX for the annual New Years Eve Shootout hosted by Geneva.  We opened up the first day with two pool play games against Utopia and Holy Cross.  We were able to dominate both games on both ends of the court.  With an undefeated pool play record, we placed in the Gold bracket with Geneva, Round Rock Christian, and Waldorf.
Our first bracket play game against Waldorf ended with a 42-12 victory.  This put us in the championship game against the host school, Geneva.  Being the third time we've played Geneva this season, both teams were very familiar with each other and it showed on the court.  It was a hard fought battle and could not be decided in four quarters.  The game went to two overtimes before we were able to secure the victory. The final score in the defensive battle was 31-28.
All tournament team selections went to Ashlene Etkie and Kaci Ketchum.  The team is now on break until January 8th with our first district game against Hill Country Christian.
Brian Sipek
Girls Varsity Basketball, Head Coach