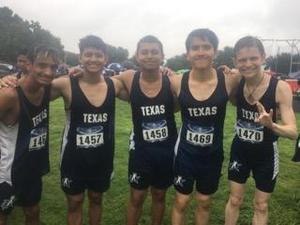 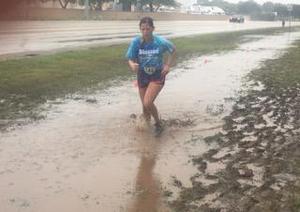 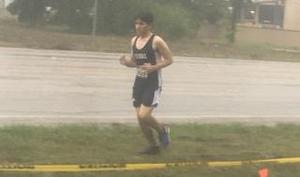 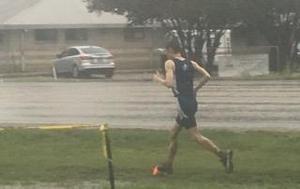 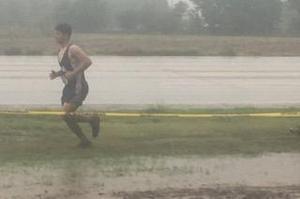 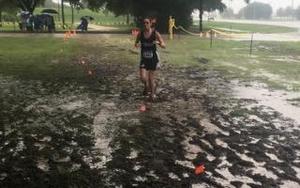 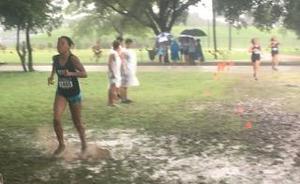 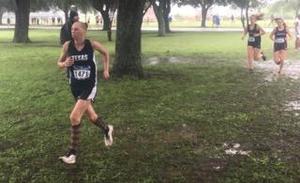 On Saturday, September 15, the TSD CC Team traveled to Texas Christian University in Seguin to run in the TLU Bulldog CC Invitational. The runners braved the torrential downpours, mud, and water filled paths just deep enough to kayak through. All of this compliments of the cyclonic weather front passing through South Central Texas yesterday. This didn’t faze our or any runner out there, as a matter of fact, running was actually even more fun!
Running in the Varsity Girls 5K was senior Jaida Scott (25:31). Her finish time was better compared to her time in 2017 on the same course. Sophomore Anabelle Weaver ran cautiously on the mud-filled parts of the course, achieving a time of 26:22. Junior Jordan Leach followed closely, achieving her 3rd season best in a row, making waves in the rivers on the running paths, coming in with a time of 29:49.
In the JV Boys 5K, junior Brody Vukmonich achieved a 3rd consecutive season best with a time of 25:03. Next to finish was freshman Hawkins Morgan, also accomplishing a 3rd consecutive season best, completed the rain-soaked course in 26:42 with a family fan club of 6 members cheering him on. Coming in next was another freshman, Josue Flores, who ran in 33:49, his first official HS cross-country 5K. Josue was actually in the lead among TSD runners in the beginning of the race having started out pretty quickly, showing great promise. In time, with more experience, he shall maximize his true potential as a runner. Kristjan Varela, sophomore, running in his 2nd 5K this season, finishing in a personal best by 7 minutes, with a time of 40:25. Shortly thereafter, freshman Willie Hanna, crossed the finish line with a 5-minute personal best with a time of 41:50.
And for the final HS race of the day, the JV Girls 5K, sophomore Kylie Jackson ran her first 5K of the season, making splashes, as she ran through “the river,” achieving a time of 44:19. A determined Jessica Davalos, showing her deep Davalos focus to her team and coaches as she ran through the mid-way point of the course, heading out for the 2nd loop, and then crossing the finish line with the same ‘Davalosness’ at the halfway point, with a time of 44:23. This was also Jessica’s first 5K of the season.
This Thursday, September 20, the TSD HS CC Team will travel to Salado to run in the somewhat hilly Tenroc Ranch Cross-Country Course hosted by Salado HS. We shall expect a full team this Thursday and dry weather.
- Coach Nick Bannon