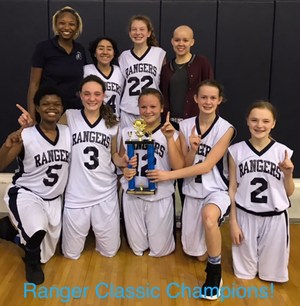 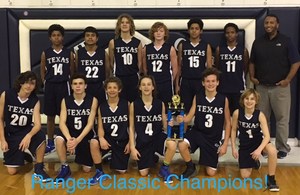 We hosted annual Ranger Classic for 7th/8th Basketball last weekend. 6-team tournament for girls and same for boys. We had pool play on Friday and bracket play on Saturday. Click on flyer for more info.
"The girls kept fire burning from the start with amazing energy over the weekend.  In every game, there wasn't a minute that they gave up.  In the championship game, during the last quarter, the opponent caught up by scoring 18 points and we lost a player due to 5 fouls with 2 minutes remaining but we shut them down with a stingy defense.  We escaped with a victory, 38-36!  There was a lot of tension among fans in the gym.  As soon as the clock ran out, the girls ran excitedly to grab the trophy.  They were so excited that they broke the trophy!"
7th/8th Girls Blue Coach Delasha Singleton
"What a tournament!  The boys refused to go away quietly until they were the champions.  In every game played, they were resilient.  Every game was a hard-fought battle throughout the tournament.  Every opponent's growl was mighty yet our Rangers feared nobody!  They gave everything they had and I am proud of them!"
7th/8th Boys Blue Coach John Moore, Jr.
CONGRATULATIONS to both teams!