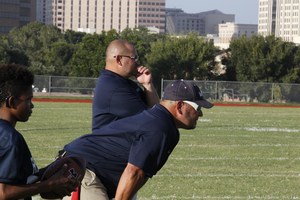 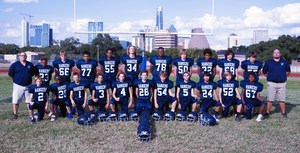 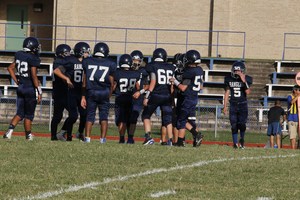 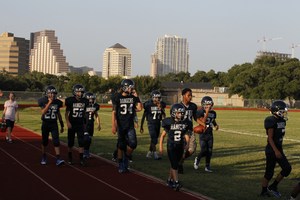 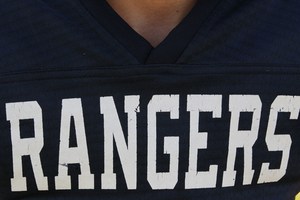 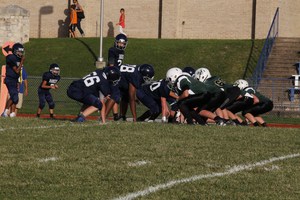 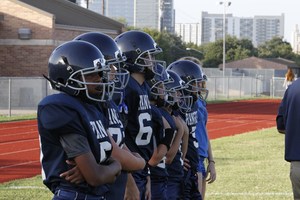 Undefeated season started with the cream of crop among 7th/8th grade players!

click on team pic for full story and pics
We started our football camp back on August 14th and worked together from Day 1 to Day 39.  Harvey and I shared several messages to players on first day of football camp relating to: Self-Discipline, Responsibilities, Execution, and Work Ethics.  The players responded very well and remain focused with their positions to ensure that each position was well polished on a daily basis. Their effort and eagerness to improve through many different drills as an individual which contributed to a team effort.  We played only two home games and the rest were away games.
We beat St. Gabriel 20-19 in first game of the season at home.  We were leading into 4th quarter, 20-13, and they scored with 20 seconds left but failed 1-point conversion which was nullified by our defense.  We got our ball back and kneeled down with 9 seconds.
Cornerstone visited us on 09/15/16 and with a pass-oriented offense. Our defense team did very well with passing coverage which denied their passing game.  Our offense team marched down the field constantly while consuming time which prevented them from putting their offense on the field.  We won by a heartbeat ,14-6.
We traveled to Brentwood Christian Academy.  We played as a team in both units: Offense and Defense.  We played together comfortably based on being familiar with new offensive formations.  Defense has always been consistent which created an awesome team atmosphere. We won 26-13.
We went to Waco to play against Texas Wind Athletics.  The two-hour long road trip created team dynamics with attitude and chemistry.  We chatted and relaxed in our seats and thankful for our bus driver for being patient with us and our rowdy noise after the game.  We started explosively with offense.  We scored 24 points in 7 minutes and had to slow down afterward due to sportsmanship toward an opponent.  We played humbly which we could not ask more from our players and the Ranger community.  We won 44-12.  The Athletic Department treated players with 4 boxes of pizzas after the game.
We went to Temple for another long road trip to play Central Texas Christian.  It was windy that day.  We struggled offensively in the first half but our defense held them to 6 points while we scored 6 points.  We scored late in the first half on a passing play but it was nullified due toineligible player downfield.  In the second half, both of us fought hard defensively and offensively.  A decent play from our offense called "Purple Spread Corner" was worth it.  We practiced this play many times during practice so that last play cemented our historic season!  We won 12-6.
Thus, we went undefeated, 5-0!  The most important reasons behind the undefeated season are the parents, fans, and volunteers.  Harvey and I are thankful for their time by helping with filling up water bottles, water coolers, holding footballs, and more.  We could not ask more from them.  We will come back next fall and find out what we can do for the Ranger community.  The Power of We was the reason for an undefeated season!
Let's Go Ranger Nation!
Head Coach Al Reins