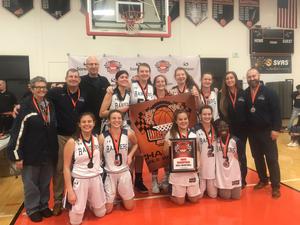 Our girls traveled up to Indianapolis for the 20th annual Clerc Classic this past weekend with a goal of a third straight championship.  With a 22-2 record before the tournament started, our team looked to right the ship after losing 2 tough games to start the new year.  The first round game would pair us with Wisconsin, a last minute replacement to New York School for the Deaf (Fanwood) who couldn't bring their girls team.  We were able to get over any jitters early and won 47-12.

Our next game would be against the host school, Indiana, which would lead to some unique challenges.  The game started on Friday evening but had to stop late in the first quarter due to the court becoming very slick and not playable.  The ultimate decision came down to ensuring player safety - the game would resume the following morning at 8:00a.  Indiana would go on a nice run and had an 11-point lead early in the 4th quarter when a time-out was called.  During the time out, each player was challenged to dig deep and find their will to win.  And they responded beautifully.  Our press became an enigma for the Indiana team, resulting in rushed shots and turnovers - giving us a huge momentum shift.  The game ended in regulation with a 32-32 tie.  In overtime, the girls continued to battle and their resilience resulted in a 38-35 win.

The Saturday night championship game would be the 6th straight meeting between Texas and Maryland.  Our girls were able to dominate in just about every statistical category and dominated their way to a 36-21 victory.  This is the third straight championship for the Texas girls team after three straight second place finishes.

Kudos to the Indiana staff for putting this tournament together and doing a wonderful job with the court after Friday night!
Coach Brian Sipek