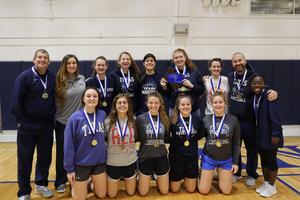 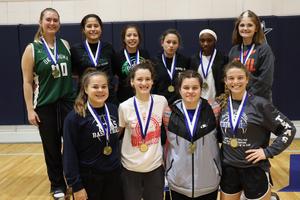 Our girls participated in the Southwest (Ranger) Classic this past weekend and did a good job representing TSD.  The four teams involved with the Classic were Arkansas, Louisiana, Oklahoma, and Texas Schools for the Deaf.  We opened the Classic on Friday morning with a Free Throw/3-point Competition.  Our girls swept both for the fourth straight year.  Immediately following the morning competitions, we played against Arkansas and won 58-3.  The second game was against Louisiana, which we won 59-26.  The third game against Oklahoma was considered the championship game since both teams were 2-0 going into the final game of the Classic.  The girls played well and won 57-25.
Congrats to Ashlene Etkie, Kalena Bumbala, and Jewel Rocha for being named to the All-Tournament team.  Our final game of 2019 will be this Thursday against Bastrop's Tribe Consolidated.  After that, we are off until January 3rd/4th where we will participate in the Brentwood Christian Academy's Winter Classic.
Team record: 15-0
-Brian Sipek