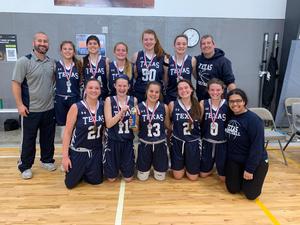 Our varsity girls basketball team headed to Universal City, TX (right outside of San Antonio) this past weekend to participate in the FEAST Patriots tournament.  This was the second year of participating after we finished in second place last year to Austin Royals.  We opened our two games on Friday with Pool B play against New Braunfels Christian Academy (won 43-20) and then KIPP University (won 36-11).  We finished first in our pool and would play against the second place team, BASIS Shavano, of Pool A, on Saturday morning.
On Saturday morning, we came out hot and ready to play against BASIS and made quick work, winning 43-12, and advancing to the championship game against the host school - FEAST Patriots.  The championship game was a good back and forth battle between both teams.  We took the lead early and did not let up at any point during the game but the FEAST players made us earn every point.  We scored a last minute basket to go up by eight points and FEAST ran out of time.
The coaches were really pleased with how the team played on Saturday.  There was an All-Tournament Team medal that we could not decide on who deserved it because it was truly an all around team effort - looking at the stat sheet, we had even scoring through all four games.  The girls showed the true definition of team basketball this past weekend and we are excited about the rest of the season.
Brian Sipek
Varsity Girls Basketball - Head Coach