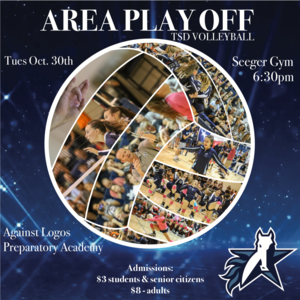 Before last Tuesday’s game, Texas School for the Deaf (29-13) needed to beat Reicher Catholic High School (15-6) to win the TAPPS 4A District 4 championship and earn the honor of being the number one seed in their district for the 2018-19 TAPPS Classification 4A Volleyball Tournament.
The Rangers split two match ups with the Reicher Cougars earlier this season. After being swept by the Cougars with a three-set win in their most recent matchup (TSD’s first district loss) the Rangers returned the favor last Tuesday with a three-set win of their own against the Cougars (25-17, 25-18, 35-33) to give TSD their first-ever TAPPS 4A Championship. This was an absolute total team effort by the Rangers volleyball team.
TSD faces off against Logos Preparatory Academy (10-15-1) at home on October 30th at 6:30 p.m.