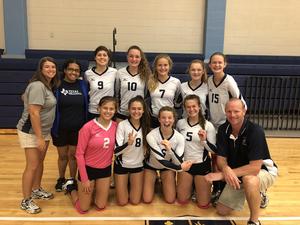 Coach RJ Kaufman, who is embarking his 15th season as a Texas School for the Deaf’s high school head volleyball coach, was recently recognized for his 300th victory. RJ Kaufman began his volleyball coaching career in 2004 as a head coach.
In 2017, RJ led the best TSD record of 33-11-2 of the season as he accumulated a total of 10 winning seasons throughout his career as a head coach. In 2016, RJ was selected as Team of Year by DeafDigest Sports and NDIAA, coach of the year award 4 times, as well as carrying the team to nine playoffs, 7 straight state playoff appearances and winning three championship games at Spike Out deaf tournaments from 2013-2017, seeking for 3rd consecutive championship, along with Deaf National Team of the year, this year.

Friday, August 24 and Saturday 25, TSD Volleyball team attended the Savio Eagles tournament in Austin. They won 3 out of 5 matches on Friday and 5 out of 7 matches on Saturday against Brentwood, Waldof, and Eastside. Texas School for the Deaf ended the tournament by defeating Eastside with (25-6) (25-11) which entitled RJ to earn 300th winning games in his career.
RJ Kaufman recently kicked off the season with 10 dedicated players. The current seniors that are expected to bring more wins are team captains, Sunita Schmidjorg and Leila Sicoli. Their next game will be held on August 30th at San Macros at 7:00pm. The team will play against Hill County Christian of San Marcos. The TSD assistant coaches are Marlene Etkie and Janna Oshman.
RJ’s comment-  “It's the girls and coaches who played/helped coaching for me in the past, present and future who had made this possible, not just for me, but for TSD.  Thank you, all of the girls and coaches who had played/coached with me.”