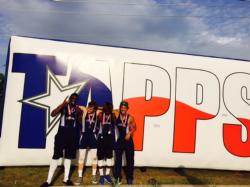 Iron Trackster Zachary Richardson started off his weekend with the long jump and triple jump on Friday.  He jumped 20 feet in the long jump for 7th place.  His final jump of 42'7” in the triple jump sent him his first State bronze medal.

The 4x200 relay team (Alvin “Tre” Anthony, Michael Singleton, Jr, Jadan Anderson and Gareth Ashton) were one of the two leading teams until they were disqualified at the 2nd baton exchange.  They still completed the race.  It was a hard race to swallow, however, the good news is that this team is a young team, with three freshmen led by a junior.  We’ll be BACK in 2016!