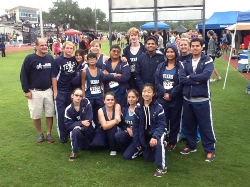 Meet Summary, Saturday, September 13, 2014
Cross Country weather came to Austin, Tx early in the season, which was a relief from the extremely hot temperatures we experience at this time of year in Texas. Last week's meet at Liberty Hill, the temperatures were well into the 90s and in the hot sun, whereas, yesterday, we were definitely cooled off in 60-degree temps and rain. Perfect weather!

As we were being cooled off, our running times were HOT!!! Each runner who ran yesterday just about achieved a personal record (P.R.) this season and even dating back to last season. Thanks to the weather!

Those who ran yesterday were: Ashlynn Forward, David Hernandez, Gregorio Mata, Brianna Matias, Kolby McKay, Jared Miller, Anna Oberrender, Abraham Polanco, Kacie Smith, Marleisha Tyler, and Gabriel Veit. TSD was represented well with 11 cross country runners, the most we have ever fielded at a race. Congratulations to these athletes for making this possible.

Not only did we have the most runners at an event, for the first time ever, we had a full boys team of at least 5 runners, we actually had 6 boys. And the girls were a complete team for the 2nd straight week, with 5 girls running.

All runners were great in the rain and looked like ferocious competitors with grit written all over their faces, some even taking falls on the rain slick course, nevertheless, getting up and finishing the race, even hobbling over the finish line, with pride and stubbornness in being true competitors.

We were fortunate to have the support of Mika Dennings and Luis Muela, who, along with their parents, came to cheer on the Rangers in and of the rain. They both were even running from point to point on the course to be sure that their teammates received their encouragement. Thanks Mika and Luis!!! We also had family members of Kacie Smith, Brianna Matias, Ashlynn Forward, Kolby McKay, Anna Oberrender, and Gabriel Veit, plus assistant volunteer coaches, Kathy Cunningham, Andrea Brown-Thompson, and Jennifer Reins all giving our runners a great push of encouragement. Thank you all!!!

Among the girls team, running 2 miles, we had "frontrunner" Anna Oberrender leading the way with a personal best of 19:21, improving her time from the week before by nearly 3 minutes. Brianna Matias was right behind Anna, also with a personal best of 19:33, 7 seconds better than her 2013 TAPPS championship time. Newcomer cross country runner, Kacie Smith, also nearly improved by 3 minutes from last week, posting a time of 20:26. Ashlynn Forward and newcomer Marleisha Tyler (participating in her first ever cross country meet), both finishing within a second of one another in a respectable time of 27:30.

On the boys side, running 3.1 miles, and taking the run by storm in the storm, we had newcomer XC runner, Gregorio Mata, posting a time of 22:53, and needs just 44 seconds to eclipse the TSD cross country record. Kolby McKay continues to run a smart race as he did the week before, this week, improving by 4-minutes from last week, with a time of 25:54. Behind Mata and McKay, we had a wonderful surprise in David Hernandez, who paced himself throughout the rain-soaked course nicely, getting a time of 27:08, which was a whopping improvement of 11 minutes from the week before! Way to go David! And two more XC newcomers in Abraham Polanco and Jared Miller, braving the elements in a strong effort to finish the 3.1-mile course in mud and rain. Welcome to the team and to cross country running Jared and Abraham!!!

Included at this cross country meet, we also had 2 of our veteran and longstanding cross country athletes in Jordan Leach, going 3 years strong, and Joe Cardenas who is in his 4 straight year of middle school cross country, also going strong, both had great races yesterday!!! Jordan, ran a great race in 19:01, only a minute off her personal best and Joe tied his personal best from last sea on with a time of 13:26 on the 2 mile course. Jordan and Joe's parents were also on hand to cheer them on!

The XC team with 11 strong looks forward to an even greater showing of more TSD XC runners as we travel to Cedar Park on Saturday, September 20. Yet before this Saturday, we will compete in the TSD time trails this Wednesday!