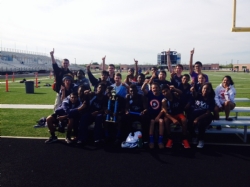 On Thursday, April 10, 2014, the Texas School for the Deaf (TSD) Boys' Track & Field team finished first place in the TAPPS District competition in Bastrop! On April 25th, we will be sending a total of 13 young qualifying athletes to the TAPPS South Regional competition being held, again, at Bastrop Memorial Stadium.

The TSD boys scored a total of 132 points in winning the TAPPS District 3/3A track championship. The tradition continues to add new list as 7th TAPPS District Champions’ accomplishment. TSD boys won all 3 relays, which was something that has not been done since Head Coach Larry Smith’s track coaching tenure at TSD.

The following qualifying TSD boys also will be attending regional as they placed in the top 4 in their events.
• Kolby McKay placed 4th in the high jump
• Zachary Richardson was 1st in the long jump & triple jump, and 1st in the 200-meter run
• Shane Carrizales placed 4th in 300/110 hurdles
• Justin Akers was 3rd in the long jump, and 2nd in triple jump
• Patrick Henderson was 3rd in the shot putt.

As for the TSD girls’ track team, Saria Webb won the 100-meter and the 200-meter runs. She will be going to regional to compete in both of these events. Taylor Mitchell placed 2nd in the long jump and 4th in 100-meter run and will also attend regional along with Caitlin Kight who placed 1st in the discus event.