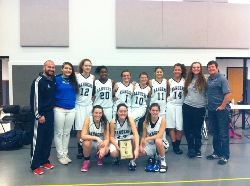 Congratulations to Lady Rangers basketball team!
We came into the Hill Country Classic with a 3-3 record and with players a little banged up.  Our goal was to get through the last three games of the season with a 4 game win streak.

On Thursday, we opened up against Granger High School.  We played one of the better games I've coached this season.  We fought hard throughout the entire game and came out with a 36-28 victory.

Friday's game would be played against a team that we faced earlier in the season, Hill Country Christian, the host school.  This was an exciting game down to the final buzzer.  It was a complete back and forth game and the final possession would determine the winner.  With the game tied in the fourth quarter, Deltona Markel was fouled with 0:00 left on the clock.  She had two free throws and only needed to make one to win the game for us.  The first one hit the back of the rim.  The second attempt was nothing but net.

Saturday's championship game put us against Bracken Bulverde Christian.  The girls played hard and built an early lead.  The Bulverde Bracken girls kept clawing their way back into the game but we responded to every attempt at a comeback by making nice offensive executions and defensive stops.  We won with a final score of 42-33.

Kudos to Mia Upchurch, Deltona Markel, and Emma Crawford for being mentioned on the all-tournament team.  Kylene Etkie earned the Most Valuable Player award.  These are prestigious individual honors but these girls couldn't have gotten their success without the full team effort that was on display this weekend.