NDIAA selects Player of the Year 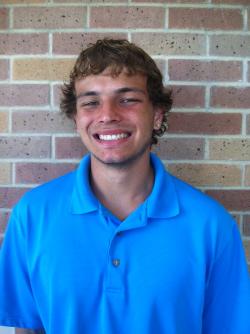 Dalton Etkie was selected as player of the year by NDIAA last June. His contributions to the football and basketball teams cannot be measured. In order to have a decent team, Dalton needs to be on that team. Definitely a difference maker on the team.
List of Athletic Awards:

From Kelvin Etkie, Head Football Coach
Definitely one of the great all around athletes at TSD. Plan to play either football or basketball at
Gallaudet. Scoring: 2 TDs, Rushing 49 for 72, 2 TDs; Passing; 116 out of 220 for 2,016, 22 TDs
and 12 INTs; Tackling: 40 solo, 27 assists, 8.5 LSY; Dalton Etkie is the heart and soul of TSD
football program. Despite the fact that he only played 9 games as QB this year, he manages to
throw over 2000 yards and 22 TDs. On the Defense side of the ball he had to step out one game
and played 8 games due to knee injury in the mid-season. This has not stopped him from playing
football. On many occasion, Dalton have saved several opponent’s touchdown by being
aggressive in his pursuit tackle. Making him the last man to tackle. He was like a coach on the
field both side, Offense and Defense. He would line up the boys properly and tell those who need
to do what the coaches want them to do. On the offense side of the ball he would make some
audible adjustment on his own and he is able to lead offense without the help of coaches.

From Chris Hamilton, Head Basketball Coach
Dalton is simply our best player. Does everything the team needs. Averaged 16.1 pts and 5.2
rebounds as a PG then forward then a shooting! guard. Did play PG at the beginning of the
season then moved to forward for a few games then ended up playing as a shooting guard. Was
selected as 3rd best player in the district. Ranger Classic, SoCo Classic and Clerc All
Tournament. First All-District team. Lead team to 19 wins. Team MVP. His 2 pt fg was amazing -
58%. He is one of my top TSD 10 all around basketball player.