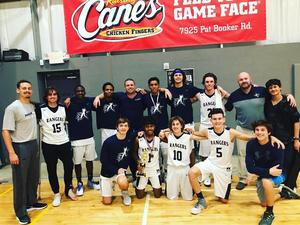 TSD boys participated in FEAST invitational tournament over the weekend. Coming in the tournament, we knew we were going to face a lot of good teams with a thin roster as our three guards (two starters) are not available due to injuries.

We played Feast Home School White Team in the first game. We trailed the entire game but managed to tie the game and force overtime. We prevailed in the end with a 39-36 victory.

In our second game, we handled Heritage Christian easily. They were 32-9 last year but lost 7 seniors from last year. We won 57-34.

We became even thinner on Saturday as we lost our captain Jack Scarboro to an eye injury. We had to play without four players and we managed to dominate in the semifinals over Central Austin Saints, 54-34.

Russell Rohde and Robert Stewart were named to All-Tournament team.

Our record stands at 5-1.
- Andy Donatich