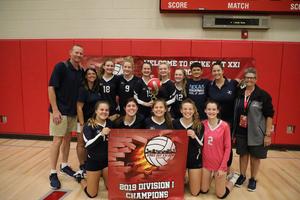 Our Varsity volleyball team traveled to Riverside, California for the 21st annual Spike Out Tournament during the long weekend of Oct. 3-6, 2019.  Prior to heading over to the CSD-R campus, we stopped by Manhattan beach for few hours.  Some of our girls took on the beach while others enjoyed the view.

As number one seeded during the bracket play, we were paired up against California in the semi-final.  We finished the game pretty quickly, 25-11 and 25-6.  For the fourth year in a row we’ve placed in the championship waiting to play against the winner of the Model and Indiana game.

Our girls played great, showing their fearless side of playing by attacking the ball, passing cleanly, and do what they were supposed to do.

Kalena Bumbala, Ashlene Etkie and Alyssa Glennon were selected to the All-Tournament team.

Much gratitude to the TSD parents and fans at California-Riverside for your show of high spirits and encouragement!  You inspire us to play our best at the tournament!  It most definitely will be a weekend that each player will always cherish!